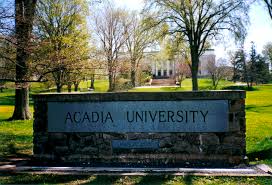 Imagine going away to college and living on your own for nine months. You no longer have your family with you, and your comfy bed at home is now over hundreds of miles away. Say goodbye to those delicious home cooked meals! This all sounds familiar, right? I bet about 99% of you can relate to this. Now… tell me if you can relate to this scenario. You are living on your own in college, and you start to become depressed and have suicidal thoughts. You decide to make an appointment with your school counselor to discuss what has been going on. Instead of getting help and support, you are told that you have to leave the residence halls because you are a “threat” to other residents.

Blake Robert was a student at Acadia University in Wolfville, Nova Scotia. Blake struggled with depression and had many thoughts of taking his own life. If he were to die on campus, the university said that he would be considered a “negative” impact on the well-being of other students in the residence. So now what? In other words, are university professionals telling this poor, innocent boy to go and die somewhere else? How much more unprofessional does it get! No wonder why Blake felt like he was being sent off campus to die. The university basically told him that they wanted him to leave so that he was no longer their problem. Blake was scheduled a disciplinary meeting, and was told that maybe he would be let back into the residence halls in September if he was “healthy” enough.

If this story doesn’t make you feel sick to your stomach, then I don’t know what will. The fact that a university even has the thought of treating one of their own students with that type of behavior and punishment is barbaric! Sometimes when people are suicidal, they choose not to speak to others about it, and keep it to themselves. Even though Blake Robert had this choice, he chose to do the right thing and seek help. Well how unfortunate is it that he wasn’t able to receive it. If I had anything to say to these university officials, it would be, “shame on you”.